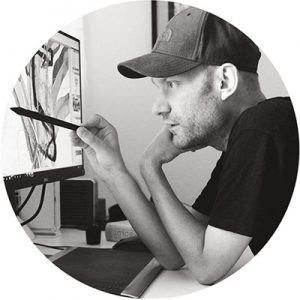 Sander Steins (Nijmegen, 6 April 1973) grew up in a working-class family in the village of Berg en Dal, located in the wooded area south of his place of birth. As a child, he was always drawing, and his copybooks were filled more with doodles and drawings than with writing. From an early age he was fascinated by forests, by which he was surrounded, and by the industrial landscapes of the Ruhr Area, not far from where he lived. In secondary school his art teacher advised him to go to art school, but since Steins was not very interested in school and often played truant, he dropped out.

In the 1990s Steins held several jobs, ranging from stock manager in a grocery store to night porter at a juvenile prison. He was also unemployed for some time. During this decade creativity was simmering. However, the introduction of the internet and digital camera rekindled his creativity. In 2004 he fully focused on photography. At first he mainly worked with models, but later he returned to his old favourite themes of forests and industry.

That was also the time he rediscovered his love for drawing. Photographs were frequently mixed with drawn and painted elements, first digitally but later also with acrylic paint, charcoal and ink on materials such as paper, canvas and wood panels. In 2009 he held his first solo exhibition in Beek-Ubbergen (The Netherlands). After that followed a very productive phase in which he shot thousands of pictures for his projects ‘Forest’ and ‘Construct/Destruct’, and produced countless of paintings and drawings.

In 2012 he started a collaboration with French artist Marijah Bac Cam under the project name of 21358SMart. In 2014 this project was awarded the Kunstpreis der Stadt Fürstenwalde (Germany) and the Prix Lacritque.org during the Salon Réalités Nouvelles in Paris (France).

In 2015 he returned to working on his own projects and sharpening his mixed media skills – combining photographic, collage and drawing techniques – which resulted in a new style of contemporary floral landscapes on paper. Places where you can encounter his work are prestigious hotels and resorts, cruise ships, offices and many private collections all over the world. In 2019 he cooperated with Saatchi Art for the Independent Hotel Show in Amsterdam (the Netherlands). Furthermore he participated in many group exhibitions worldwide, in cities like Berlin (Germany), London (UK) and Beijing (China).